Music in the Garden Sewing Box by Marsha Papay Gomola 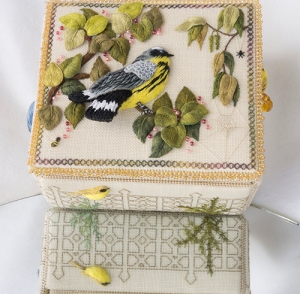 One of the most popular themes in historic needlework is the five senses. I have wanted to do a modern interpretation, but the theme is too large for one project. So, I decided to design a series featuring the five senses. Sound is represented by Music in the Garden.

An interesting sewing box in the collection of the Colonial Williamsburg Foundation was the inspiration for the shape of the box. The two lids allow space for multiple needlepages and space for tools in the box.

The design’s focal point is a Magnolia Warbler. The warbler is completed using felt padding and layered slips. I used five slips to create his tail and wings.

The warbler is perched on a cottonwood branch in early spring. In front of the bird is a nut tree with its interesting catkins, the male flowers.

The sides of the box are decorated with blackwork and small birds. The inspiration for the blackwork was a fence I photographed in Williamsburg.

The interior and bottom of the box are decorated with band samplers and blackwork.

← Music in the Garden Sewing Box by Marsha Papay Gomola