Susan Dawson is certified by the National Academy of Needlearts (NAN) as a judge and teacher, and is a Master Craftsman with the Embroiderers’ Guild of America (EGA). She served as NAN’s Director of Judging Certification from 1993 to 1998. 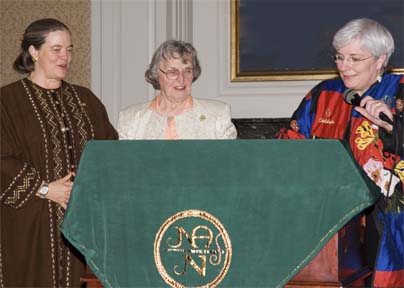 During her tenure she organized The Exemplary, NAN’s annual embroidery exhibition. She continued her work with NAN as a Director Emeritus and Counselor for the Teacher Certification Program. She also served for a decade as a judge for EGA’s Master Craftsman program in the silk and metal area. In 1993 Susan received one of the first Educator’s Award of Excellence from EGA.

In 1975 after obtaining a BS in Education from the University of Utah, Susan began her embroidery study with art classes from the Boston Museum of Arts and has studied continuously since then with most of the major needlework organizations, through many schools, and under the skilled guidance of a series of outstanding private teachers. When teachers have not been available, Susan has worked independently. In the process she produced stitched examples of more than a hundred distinct embroidery techniques and has designed using with many of them. She teaches stump work, crewel, creative stitchery, and both Japanese and European (ecclesiastical) styles of silk and metal embroidery. Susan’s design work has occasionally expanded beyond embroidery into other textile areas, concrete architecture, garden design and mosaics.

In over 30 years of embroidering Susan has designed and stitched well over 200 original embroideries and has created a more than equal number of study pieces, patterns and adaptations. Susan’s embroidery has been receiving public recognition regularly for more than twenty years through exhibit awards, acquisition into permanent collections (including the EGA and the NAN collections), and by its inclusion in four books.