Caela Conn Tyler held certification in canvaswork, Level II from the National Academy of Needlearts. Caela taught in Canada and throughout the United States including several national seminars for the American Needlepoint Guild and the Embroiderers’ Guild of America, numerous EGA regional seminars, the Council of American Embroiderers, Callaway School of Needle Arts, and the National Academy of Needlearts. Several of her canvaswork designs have won awards in numerous judged and juried shows. Her graphic arts skills were evident in the logos she has designed for various organizations and in her work as a free-lance page-layout artist. Although canvaswork was her focus, she worked in several media, particularly in garment design and embellishment

Caela’s statement on The Gourd Ladies: This piece evolved from the gourd artistry of Robert Rivera, a prominent New Mexican artist.  Mr. Rivera has done a series of women, created from gourds that are treated with a shiny charcoal black finish, similar to a San Ilfisando pot. The ladies feature brightly painted kachina-like faces, real hair, and several bead necklaces each.

I adapted the artist’s approach, using a significant amount of neutrally hued threads on a matching neutral canvas background. Of course, I couldn’t leave well enough alone – I added color to the body of each lady – each containing a color symbolic or reminiscent of the southwest.  The color is “puddle” at the bottom of each doll and reappears in the face. The upper portion of the dolls remains solely neutral as a backdrop for the bead and fetish necklace(s). 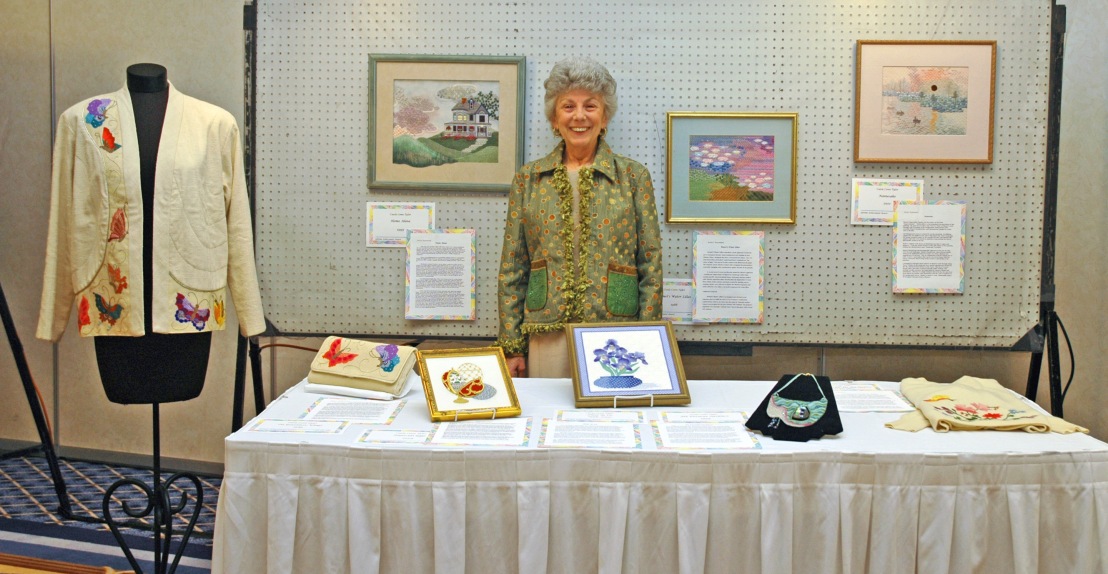