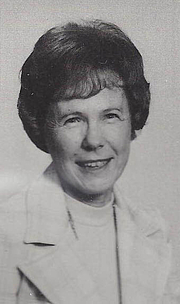 Audrey Francini was well known in needlework circles as an outstanding teacher, lecturer, designer and author. She earned her certification in Crewel Embroidery from the Embroiderers’ Guild of America, Inc. (EGA) and taught for EGA national and regional seminars, at Callaway Gardens Needlework School, for Valentine and NAN, at Pinehurst, at Elsa Williams Needlework School, and at seminars and for chapters in both the United States and Canada. Audrey served on EGA’s Crewel Certification Board and also judged the Mastercraftsman Program in Silk and Metal Threads.

Audrey pursued her crewel embroidery education at the Wallingford Crewel Studio in Wallingford, Pennsylvania. She also studied silk and metal embroidery with Minna Sturcke and Elsa Cose. Her Japanese embroidery experience came from 6 years of study with Mr. & Mrs. Tamura, and Audrey  continued to study at the Japanese Embroidery Center in Atlanta.

Audrey began stitching in 1970 while living near Detroit. She was instantly identified as “a natural” and started teaching crewel immediately. In 1972 she taught her first national seminar sponsored by the EGA in Dearborn, Michigan. Shortly thereafter she expanded her accomplishments by writing the first of her two books: Crewel Embroidery With Texture And Thread Variations. Asked why she wrote this book, she replied that people kept insisting she do so, and she saw a need for an up-to-date, comprehensive compendium of crewel stitches and techniques. This book was written before the advent of home computers, and Audrey did all the diagrams by hand. Audrey also wrote a second book entitled The Art of Soft Shading, a subject at which she had no equal.

When asked to choose her most outstanding piece of embroidery, after some deliberation, Audrey chose her rendition of St. Benedict. She also noted her tour de force endeavor entitled Birds of the World which is a three panel Japanese silk screen worked in Japanese silk and metal techniques.

Audrey noted as the highlights of her career her association with all the wonderful people found in the embroidery community, the ongoing experience of learning and sharing, and her satisfaction with her embroidery accomplishments.