Posted on September 19, 2015 by denisebeusennan 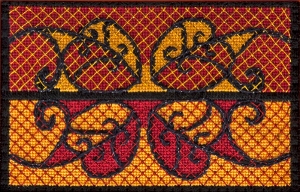 This piece started as a Lee painted canvas purchased for a Guild program in which we were to learn how to appliqué a canvas to the side of a purse. The curvilinear design and the intended use were not a good fit to decorative stitches, so I began stitching in Basketweave. By the time the program rolled around, I hadn’t finished stitching it, I decided I didn’t want a purse after all, and I found the stitched areas boring! But too much of it was done to simply toss it in a drawer.

I thought about ways to make the project more visually appealing and more challenging to me, so I decided to work a laid filling over the Basketweave, and to mount the piece in a boxtop. I quickly discovered that I’d need to modify the design to fit in any box, so I analyzed it to determine how I could extend it. The design was lengthened 1″ in the long dimension, and a black border placed around it. For the filling, I stayed with the red and yellow in the original design, but worked it to maximize contrast between filling and background. To make the curved lines more pronounced, they were worked in black stem/outline stitch over the laid filling.